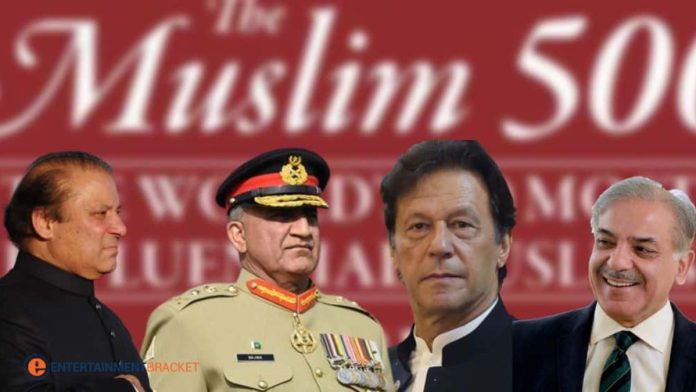 In its list of the Top 500 Influential Muslims in the world in 2023, the Royal Islamic Strategic Studies Centre (RISSC) has include 25 Pakistanis. Including Malala Yousafzai, Imran Khan, and COAS General Qamar Javed Bajwa.

The founding leader of Dawat-e-Islami, Sheikh Muhammad Ilyas Attar Qadri, is place 50th on the list. At the same time, renown Islamic scholar Justice Sheikh Muhammad Taqi Usmani is regard as the sixth most influential Muslim in the world out of all 25 Pakistanis.

Imran Khan and Malala Yousafzai, two other prominent Pakistanis, were also include in the honorary top 50 list and recognize as the best in their respective industries.

According to the Top 500 Influential Muslims in magazine, the top Pakistani Muslims in the following fields are:

Ayatollah Syed Sajid Ali Naqvi, head of the Shia Ulema Council (SUC), and Siraj-ul-Haq, head of Jamat-e-Islami (JI), have both been name in this category.

The COAS, General Qamar Javed Bajwa, the chairman of the PTI, Imran Khan. And the Sharif brothers of the PML-N, Nawaz Sharif, and Shehbaz Sharif, are all include. On the political list of notable Muslims in Pakistan.

Due to their considerable contributions to the nation\’s social challenges, Muniba Mazari and Malala Yousufzai are include in this category under their respective names.

Shahid Khan, a rich Pakistani-American businessman and sports mogul is the lone representative of his nation in this group.

Furthermore, the Coordinator-General (CG) of the Organization of Islamic Cooperation (OIC), Prof. Atta-ur-Rehman, Sitara-i-Imtiaz winner Computer Scientist and Chief Digital Officer (CDO) of Jang Group, Umar Saif, and an award-winning Physicist, Irfan Siddiqui, have been featured as the pioneers of their field in the Muslim world.

As a result, renown Pakistani nasheed and reciters Ismail Al-Hajj Siddiq, Abida Parveen, Muhammad Owais Raza Qadri. Another well-know nasheed reciter, and Oscar-winning filmmaker Sharmeen Obaid-Chinoy have been listed among the most influential Muslims. Pakistan has made enormous contributions to the world\’s arts and culture.