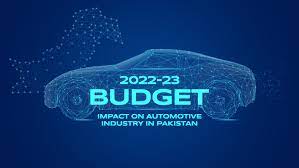 In the National Assembly, Finance Minister Miftah Ismail presented the Budget 2022-23. Which included some key items relating to the automobile industry. Such as a rise in Advance Tax on cars with engine capacity greater than 1,600cc.

During his address, Finance Minister Miftah Ismail stated that an increase in the Advance The on cars with engines larger than 1,600cc was proposed to shift the tax burden from the less fortunate to the affluent. Furthermore, the non-filer tax rate has been increased from 100% to 200 percent to encourage people to become filers and save money.

Furthermore, it was propose that the Advance Tax on Electric Vehicles (EVs) be increased to 2% of the vehicle’s worth. However, if the vehicle’s worth exceeds Rs. 5 million, the tax will increased to 3%. The Finance Bill said, “Provided that in circumstances where engine capacity is not applicable, and the vehicle’s value is Rs5 million or higher, the rate of tax collected shall be 3 percent of the import value.”

It is important to note that this is merely the proposed Federal Budget for 2022-23, which will be debated by politicians in the National Assembly and Senate before passing. The Annual Budget 2022-23, if adopted, will impact several of the cars listed above, as they have engine capacity greater than 1600cc or a value greater than Rs. 5 million.

When is the last date to exchange old banknotes?

Suzuki Swift 2022 – Prices & Everything You Need To Know

Is Suzuki Mehran Coming Back to Pakistan?