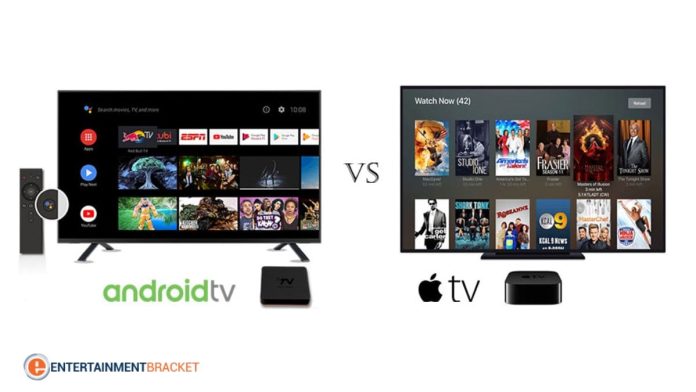 What is Apple TV?

Apple TV is a digital media player and microconsole developed and sold by Apple Inc. It connects to high-definition television and streams digital media from the iTunes Store, Netflix, YouTube, Flickr, iCloud Drive and other content providers. The HDMI connection means that no cable box or satellite TV deals are necessary.

In essence, it’s an oversized iPod that also plays video through AirPlay via WiFi or Ethernet cable. You can also access all your iCloud photos on the big screen using AirPlay, as well as stream music from your Mac/PC via iTunes or Windows Media Player over a WiFi network (or directly from some mobile devices).

What is Android TV?

Android TV is a smart platform that brings you the best of entertainment and apps, movies, TV shows, games and more. It is power by Android and can be accessed through a mobile device or a computer.

According to DIRECTV STREAM’s experts, “It’s available on a wide range of devices from manufacturers, including Sony, Sharp and Philips, so there are lots of options for you to choose from.”

Apple TV includes a number of features that make it stand out from the competition. The most obvious difference between Apple TV and other streaming devices is that it’s made by Apple. This means it has a lot of support from third-party developers, who create apps specifically for use on the Apple TV platform.

The Android TV is much more versatile than Apple’s offering for many reasons: it has an operating system based on Linux, which allows it to run any app; this means that if there isn’t an app for something you want or need, you’re free to find one without restrictions imposed by Apple; finally, another benefit of its open nature is that users don’t have to worry about security issues like they do with iPhones/iPads/Macs—and yes! They’re all vulnerable too.

If you’re looking for a new set-top box to buy, and want to know the differences between Apple TV and Android TV, read on.

Both devices allow you to stream content from the internet as well as air your own personal media files. Both have remote control and can be connect via an HDMI cable if necessary (but they also both come with WiFi connectivity).

One key difference that sets these two apart is their operating system: Apple TV uses iOS, while Android TV runs on Android Lollipop 5.0 or higher. There are other features that distinguish each device—for instance. Apple has its own app store where users can download games or apps directly from their iPhone/iPad/Mac computer onto their television screen, whereas Android does not have an internal app store but allows developers to create APKs that users can transfer over via USB connection (or sometimes even WiFi).

This article has given you a brief overview of the difference between Apple TV and Android TV. Now that you know how each one works, what it can do for you, and the pros and cons of each one, you’ll be able to choose which is better suit to your needs!