Home > People > Marrying the right person, at the right time is important than marrying the wrong person at the ‘perfect age 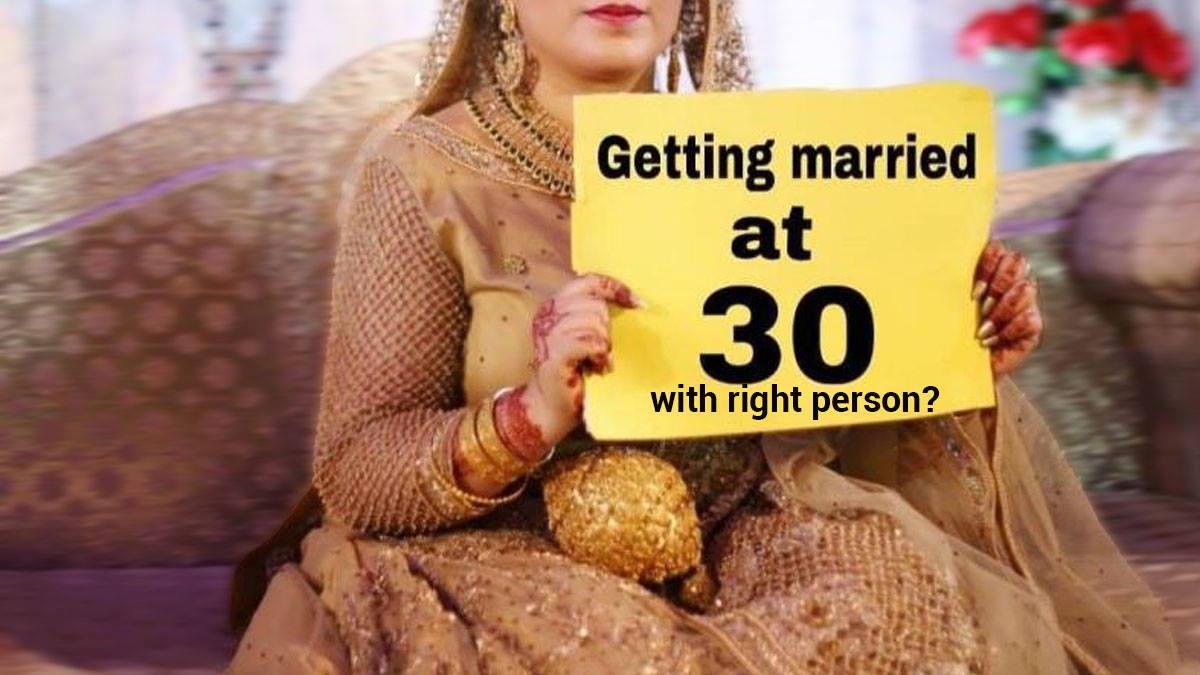 Marrying the right person, never the right time to marry the ‘wrong’ person! It just wastes valuable time and hurts everyone in the end. No one deserves that.No one the ‘wrong person’! As far as marrying the ‘right’ person at the ‘wrong’ time life is full of uncertainty. There’s never a ‘right’ time, If this person is the ‘right’ person, he or she will have the maturity and patience to allow their partner to grow into their own and love them through the entire process. They won’t let material concerns or worldly problems stop them. They make compromises and survive the storms together. We all have the responsibility of being that ‘right’ person for the people in our lives.

It’s a story of a girl who marriage at 30 and said “ Almost every other girl goes through the pressure of not getting married at the ‘right time’. Me & my parents were always asked, “when is she getting married?”. They had no clue how mentally torturing was that question for us. My first proposal came when I was in 6th grade, but thankfully things didn’t work. Today, I am marrying the right person (though a bit late than the age which is considered normal in society). Getting married at this age should be normalised.

Marrying the right person, at the right time is important than marrying the wrong person at the ‘perfect age’.” You never marry the right person, and the entire concept of the “right person” is faulty in that implies that it’s possible to find such a person. (And that somehow just by finding that person you’ll end up with a better relationship.)

It’s a fairy tale that serves us all poorly by implying that if things don’t go well, it’s because we didn’t choose the right partner. It’s an abdication of responsibility. (And then when things stop working, we can decide that we were with the “wrong person”.)

Neither you nor your partner knows everything about each other because that’s not possible – you don’t know even know yourself that well. Beyond that, people continue to change throughout their lives, both spontaneously and in reaction to life events (one of those events being marriage itself, natch.) So unless you can see the future, you can’t know if they’re “right person”. Someone who is “right” today might be “wrong” tomorrow by the same criteria. Or your criteria might shift.

Also Read: To Be a Woman in Pakistan, Story Abuse, Shame, Society pressure, and Survival

The truth is everyone going to hurt you. You just got to find one’s worth suffering for

There is no such thing the right person. It’s all supply and demand relationship designe to trap us into a marriage.

In short, women prefer the rich. Marriage rules are designe to bankrupt rich, smart males—this effectively rations females in equal share for everyone.  In our society, women need rich men on the name of the right person. People change with time. So how can you predict the future? I just don’t understand how you can jump into a lifelong commitment with certainty when there are so many variables.

Also Read: Why Do Marriages Fail?

No one is perfect in this world if someone has a good quality they have a bad one too which irritates the others, Islam teaches us to love each other and accept a person and love them for the sake of Almighty Allah.

A healthy recommendation is to no one perfect in this world. There is nothing called the “wrong time”. If you decide to get married than at any time is a great time. Marriage is merely a social contract. We think that it has a great deal to with relationships and all that goes under that unified term. One must necessarily detach arbitrary social contracts from relationships.

Also Read: Are Females Underrepresented in The Superior Judiciary?