Four female pupils were arreste on charges of allegedly assaulting a classmate at a private school in Lahore Defence Housing Authority (DHA) neighbourhood.
Pre-arrest bails are granted to Lahore schoolgirls who were charge with the “torture” of a classmate! Lahore School Girls Booked For Torturing Class Fellow

The Lahore Sessions Court has order that the three girls responsible for the allege abuse cannot be arreste until January 30.

Four female pupils were arreste on charges of allegedly assaulting a classmate at a private school in Lahore’s Defence Housing Authority (DHA) neighbourhood.

As the video of the incident spread widely on social media, the horrifying specifics of school bullying emerged, causing a tremendous hue and cry.

According to reports, the court granted three schoolgirls’ requests for bail in exchange for surety bonds of Rs. 50,000 apiece and prohibited police from detaining them until January 30.

After a video of the event, which show pupils at the school hitting a classmate. Went popular on social media, an FIR was file.

Imran Younas, the victim’s father, claimed in the FIR that his daughter’s classmate was a drug addict who wanted his daughter to work for her.

When his daughter declined to join their group, he claimed that two sisters mistreated her.

The victim was beaten, brought to the canteen, and humiliate there, according to the FIR.

People Criticize Gold Coins Being Thrown At A Wedding

The kid’s father claims that Jannat, Umaima, and Noor Rehman, three of her classmates, beat the girl. 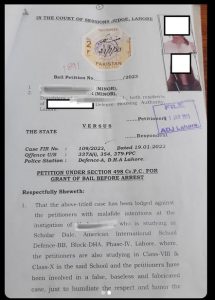 According to the FIR, Umaima, a boxer, severely assaulted her and even repeatedly stabbed her. According to rumours, Jannat was a drug user who now wanted to trap the injured girl in the drug culture.

One of the girls also had a dagger. The victim’s father also say that the suspects stole a locket and a gold chain. From his daughter as they were abusing her, it continued.

The victim’s father claimed he also contacte the Federal Investigation Agency (FIA). To request that the people who poste the footage to social media be held accountable.